Molly’s Miles 5K, 10K and Virtual Run returns to Columbia, Missouri near the MKT Trail Connector. This event raises money to support family members of police officers who have died in the line of duty. All proceeds from the race will be provided to Missouri Concerns of Police Survivors (C.O.P.S.).

The race is named after Officer Molly Suzanne Thomas Bowden who was mortally wounded while conducting a routine traffic stop on the night of January 10, 2005 in Columbia, Missouri. Molly passed away on February 10, 2005 at the age of 26 years old. She was with the Columbia Police force for over three years and is the first Columbia Police officer killed in the line of duty.

The race is “In Honor of the Survivors,” with a focus on the surviving families and affected co-workers of Missouri law enforcement officers who have died in the line of duty. 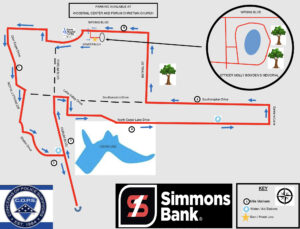 Courses are within striking distance of the MKT connector!

2023 Boonville Do or Die Half Marathon and 5k

2022 Boonville Do or Die Half Marathon and 5k

2021 Boonville Do or Die Half Marathon and 5K