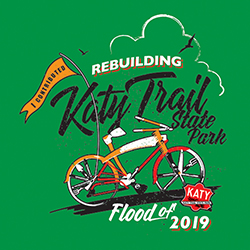 Flood donations for trail restoration and repair are being accepted by the Missouri State Parks Foundation.

Severe flooding at Katy Trail State Park has led to numerous trail closures within the park and the cancellation of events such as the 2019 Katy Trail Ride across Missouri.

Nearly 100 miles of trail were underwater, and it may take several more weeks for the water to recede in some parts of the trail. Based on the damage caused by the comparable flood of 1993, Missouri State Parks staff expects to find scour holes, washouts, bridge damage, downed trees, debris, silt accumulation and inconsistent trail surfacing.

You can help rebuild the trail and accelerate the restoration process by making a donation to the Missouri State Parks Foundation (link below). Everyone who donates $100 or more will receive a T-shirt commemorating their role in rebuilding this Missouri wonder!