The Pedaler’s Jamboree is a music festival hosted along the Katy trail! Historically the ride has started at Flat Branch Park in Columbia, Missouri and ended at Kemper Park in Boonville.

This year, the route has changed.

The historic flooding of 2019 closed multiple sections of the trail and required the Pedaler’s Jamboree directors to make multiple route changes. While waters have receded, the trail still shows damage from the summer floods. In particular, the Salt Creek bridge between Rocheport and Franklin, MO is still heavily damaged and needs to be replaced. (Note that the trail will be detoured on Hwy 240 and 40 for everyday users.)

“Having the advance insight of this trail detour helps us make safe and calculated plans for next year’s ride” Mike Denehy, co-founder of the Jamboree said. “Although we will miss our friends and traditions in Boonville, we plan to reinvent the Jamboree and give riders a new experience by routing the adventure from Columbia to Jefferson City!” 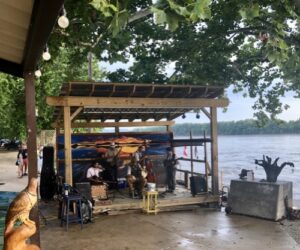 The Pedaler’s Jamboree expects to bring over 2,500 bike riders and revelers to Jefferson City May 23rd and 24th. The 2020 ride will still start at Flat Branch Park in Columbia and head down the MKT Trail to the Hindman Junction to the Katy Trail. The new route will re-direct riders south on the trail. As usual, trail-side stops will include live music performed by regional and national acts in McBaine, Cooper’s Landing, Hartsburg, and North Jefferson Park. The band lineup and location details will be posted in early 2020.

“When considering locations to host the main stage in Jefferson City, the Missouri State Penitentiary was at the top of our list.” says Colin LaVaute, co founder. “The city and state officials were extremely receptive and accommodating to the proposed rerouting goals. Plans came together quickly and successfully due to their great enthusiasm and support.”

The Missouri State Penitentiary was the oldest continuously operating correctional institution west of the Mississippi River, open from 1836 to 2004 when it closed. Tours of the widely believed haunted facility draw in over 32,000 visitors per year. While special events and concerts have taken place in the penitentiary grounds in the past, the 2020 Pedaler’s Jamboree participants will be given the first exclusive group opportunity to camp on the grounds.

“This is the first time that a group like this will have the opportunity to spend the night voluntarily in the entire history of the Missouri State Penitentiary. We think that is pretty cool!” says Jefferson City Mayor Carrie Tergin.

Stay tuned to KatyTrailMo.com for regular event updates and information!

Additional event details, along with tickets can be found here.